It's placed off the Arauco province shores (Biobío región), 34.2 km west of Tirúa. It has 800 inhabitants distributed on its 48 km2 surface, dominated by a small mountain range, covered by native forest belonging to Isla Mocha Natural Reserve.

It has a native forest, where its main specimens are arrayán, ulmo, olivillo, laurel, canelo, boldo and diverse variants of brackens. This rich virgin jungle offers an ideal habitar for more that 100 birds such as piden, torcaza, bandurria and fardela castellana, the latter makes its nests under the trees roots in the highest part of the forest and by night they feed from the sea, these birds look alike seagulls; also on the island it is highlighted the presence of indigenous mammals, such as the pudú.

The first indigenous inhabitants named the island as amuchura, which means "souls resurrection". 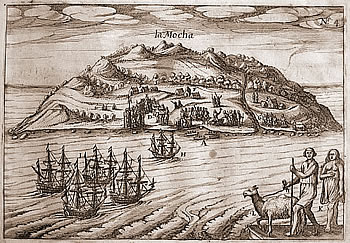 Today, the Island is inhabited by people who live collecting algae, shellfish, agricultura, breeding livestock and the growing tourism.

Aside from its beaches and native forests, Mocha Island stands out as a place of a number of sinking ships because of its dangerous coasts with plenty of rocks. In fact, it was regularly visited by pirates coming from France or Netherlands that used it as a resupply site, highlighting Francis Drake –who got his famous scar on the face during a fight on the island- and Oliver Van Noort. The famous novel Moby Dick written bu Herman Melville, was inspired by the island, particularly by its famous sperm whale “Mocha Dick”.